After the six month temporary administratorship of Fr. Punyko, the Reverend Michael Knapik was appointed pastor of the parish. His appointment brought new life into the parish. Numerous “firsts” were to mark his tenure. For one, he introduced the first printed weekly bulletins in the parish. A gift of a complete set of these bulletins for the parish archives was made (1992) by Verna Makarchuk, thus enabling the preservation of an important chapter of the history for future generations. He also initiated the first adult education program in the parish. In addition, he foresaw the eventual need for a parking lot. To further this goal, four and a half lots were purchased in 1953 behind the church for a total of $1,100.00. Ever concerned about spititual matters, Fr. Knapik founded the parish Holy Name Society with Edward Berezny serving as its first president.

All was not “rosy” during this time. Indeed, probably the most difficult moment in the parish’s history was being played out at the same time when so many good things were happening in the parish. The matter concerns what Bishop Daniel of Pittsburgh labeled “that nefarious ‘Club’ matter” in a note to the pastor dated January 26, 1953. .During Fr. Bakaysa’s latter years, the SS Peter and Paul Athletic Association was founded for the young men of the parish. Modeled on the fraternal Sokol clubs, the association was to promote athletics among its members as well as maintain a reading room and library to encourage knowledge of government and other topics, music being one of them. Property was purchased by the church for the association at 301-317 Anthracite Street and 1510-1512 East Third Street. According to the original agreement, when the club could refinance the mortgage, the deed would be signed over to the club. Problems, however, arose as to the officers not to be in good standing in the church. On a more basic level, the club seemed less an athletic and Christian association and more like a drinking club. It was, thus, Fr. Knapik’s intent to sever all connections between the club and the church, entailing as a consequent, a change in the very name of the association. Although matters did go to court, an out-of-court settlement was reached. The church handed over the deed to the property, but the name of the club had to be changed to the “Heights Athletic Association.” This club has since moved to Easton Avenue after the Bethlehem Steel buy-out of the homes and businesses of the Heights area of south side Bethlehem. Considering Fr. Knapik’s pastoral achievements, his stay was all-too-short. It was to end four years after it began in 1954 whereupon he was called to service in Pittsburgh.

Fr. Knapik was followed by the intellectually gifted Reverend Louis Sismis, S.T. D., Ph.D. During Fr. Sismis’s time, the Rosary Society and the first group of pirohi workers were organized. Pirohi sales were to become the staple of the church’s fund-raising activities in the future. After completing renovation work on the rectory, church, and church basement, he was recalled to Pittsburgh to put his education to work in the seminary and at the chancery.

Reverend Vladimir Firczak was then appointed as temporary administrator of the parish. During his tenure, which was to prove all to brief due to a tragic boating accident, much of lasting value was still to be accomplished. The parking lot was macadamized for $2,700.00. The big bell (1600 lbs.) was “Baptized” St. John the Baptist, the medium bell (900 lbs.) Virgin Mary the Theotokos, and the small bell (500lbs.) St. Joseph Virginal Spouse. An outdoor shrine to Our Lady of Perpetual Help was also commissioned for $1,880.00 to honor the memory of parish men who died in the service of their country during World War II. These included: Michael Bandurich, Charles Beleykanich, Michael Dyonda, Nicholas Musko, Joseph Pristash, and Charles Sukaly. To have these new ecclesiastical goods properly blessed, the Most Reverend Nicholas T. Elko, D.D. was invited from Pittsburgh for St. Michael’s Day services on November 3, 1957 at which time the Ruby Jubilee of the parish’s foundation was also feted. Most tragically, as mentioned, Father Vladimir was to drown on a fishing trip of the Jersey shore on August 19, 1958, at the age of of 43. Bishop Elko returned to Bethlehem to officiate at his funeral on August 23, 1958. Fr. Vladimir’s body was then transported to St. John’s Cemetery, Hazleton, PA, for burial. 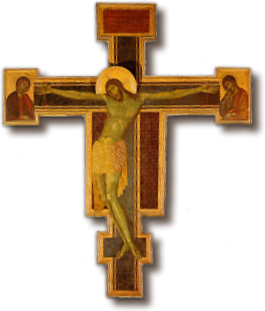 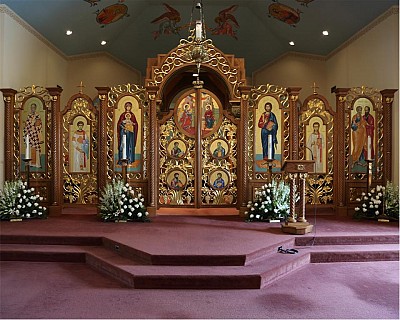